72 poems, including a large number written in the past year, make up the 20th full-length collection by London, Ontario poet Andreas Gripp. Poems dealing with the multifaceted layers of love, verses encompassing nature and spirituality, and our human interaction with everyday events that may not be so ordinary after all, are written in the author’s usual lyrical and accessible style. In addition to new poems written exclusively for this volume, there is a generous amount of favourites from his previous four books as well.


Andreas Gripp has had his work appear in a variety of underground journals and anthologies in Canada. He presently works in a used bookstore and lives with his wife and fellow writer, Carrie Lee Connel. 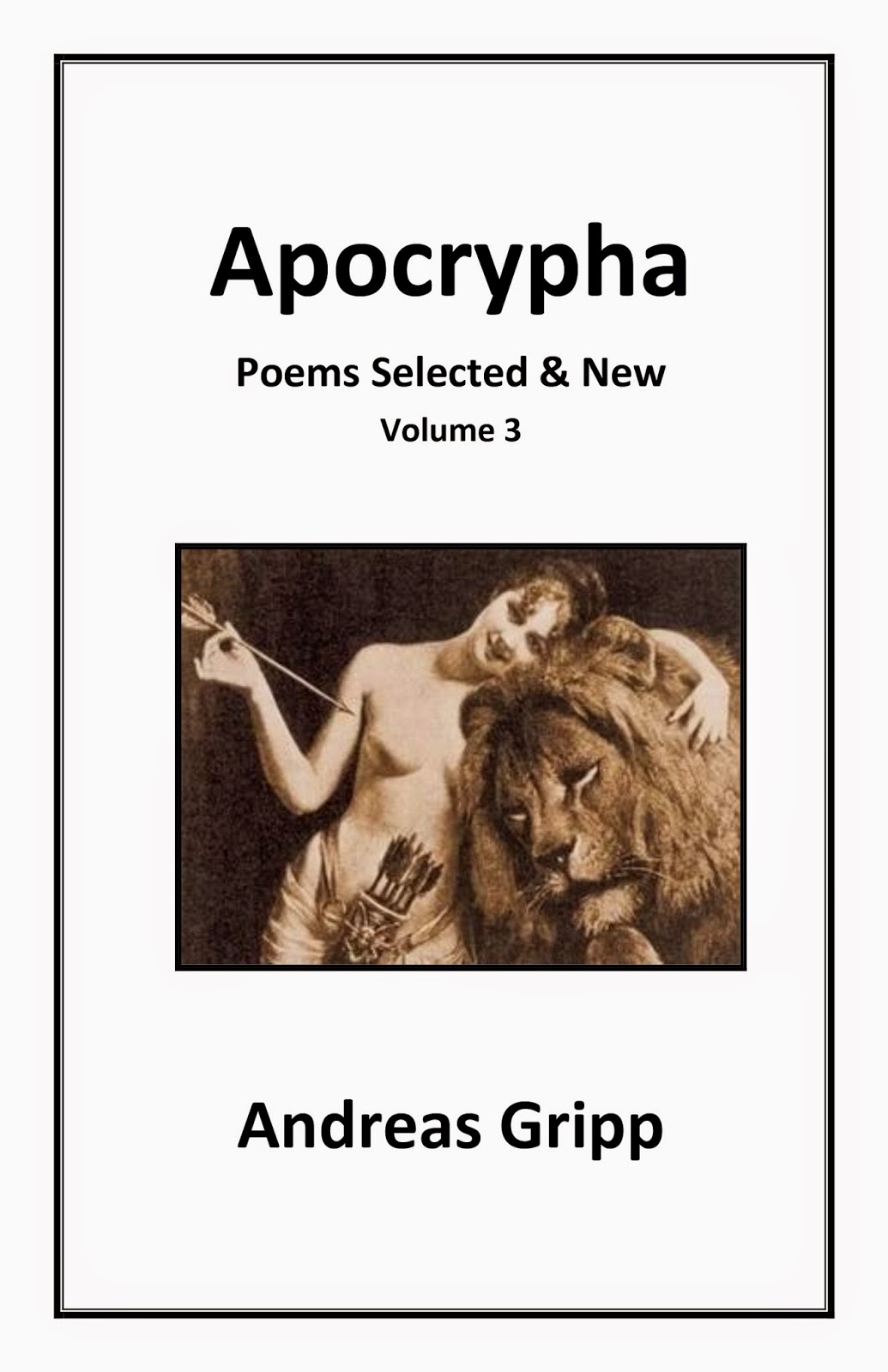 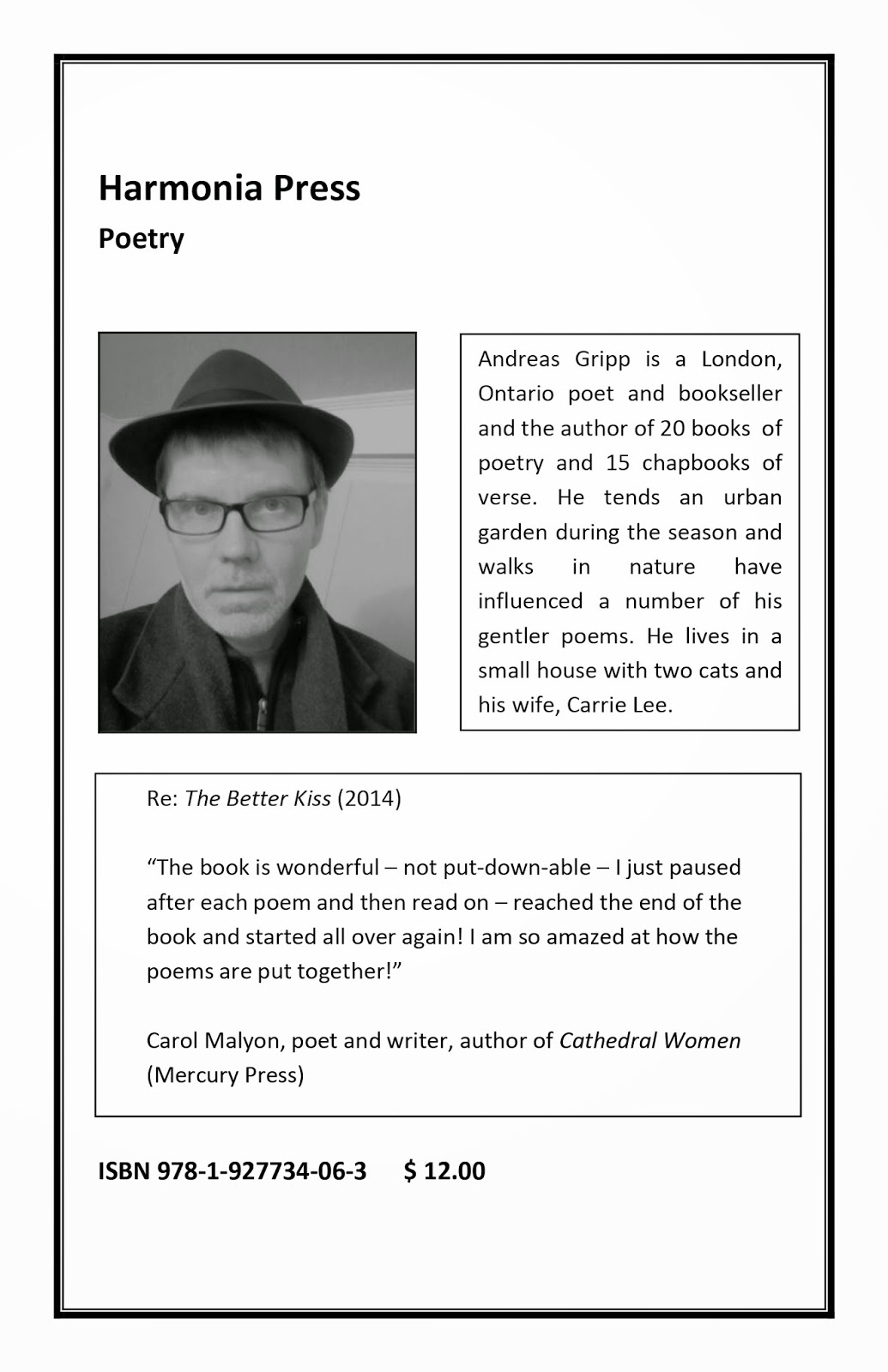 That page at the end of my notebook,
the one that is blank,
is the best poem of mine you’ve ever read,
you say to me as I choose which to keep,
which to toss and pretend I never wrote.

I went through it
when you were away, you reveal
in a tone bereft of innocence,
like a boy boasting to his friends
that he managed to swig some vodka
when his parents were in the basement,
perhaps sorting through laundry
or checking on the furnace
or doing something that required him
to be cunning and to seize the moment
like a vulture that dives to the ground
while the corpse is still warm enough
to pass for something living.

Your metaphors are silly, you say bluntly,
your analogies make me laugh –
those of scavenger, Russian drink,
mischievous youth.
Take the last sheet in your book,
the one without writing:
it made more sense than anything else
you’ve rambled on about.

I reply that you are right,
that pallid vacancy and lines of blue
have more to say than verbosity,
that I should just write “white”
instead of “pallid,”
that I misread my spiny thesaurus,
that what is simplest
is most complex
and lives in a realm
no words can elucidate
or yield direction to;

that it’s a sign of literary innovation
to have an entire volume
of nothing but lined paper,
that the next time I buy a notebook
I’m best off to merely scrawl my name
upon its cover
and wait for the accolades to pour in
from those who know the work of a genius
when they see it.

I cannot be sure that the birds
and the squirrels – let alone the big racoon
that climbs down from the belatedly budding tree –
are the same characters who I used to see
then didn’t through months of frozen landscape
when, I imagine, the mammals
were in some sort of hibernating state
or at least taking it rather easily
in their primitive burrows while the birds
were in Florida sunning themselves
and drinking premium water from a fountain.

I feel they’d be offended if I said “welcome back” –
that they’d believe I think they all look alike,
that they might be here for the very first time
and I’ve mistaken them for last year’s gang,
that the food I’m leaving as a token of friendship
wouldn’t be their first choice on the menu,
that a would-be friend wouldn’t assume
they’re all the same
and that they could easily pick me out of a crowd
of 100,000 people
within a second of doubtless wonder.

Andante in H
– for Carrie

Each note I play on the piano is for you
I say, in my adoration, the real ones
and the ones that I’ve made up
and I really can’t play the piano
as well as I pretend I can,
but the songs I string together,
impromptu, spontaneous as they may be,
are nonetheless love songs,
ones that Brahms and Debussy
could have conjured
had they not been so obsessed
with trite details like composition
and wondering if the cellist and pianist
could really play their instruments
or were merely faking it
amid the frantic waves of a baton
and the gasps from a startled audience
who’d heard nothing like this before.